The history of the Sheltie is relatively recent and its earliest history is rather undistinguished. The Shetland Islands are remote and sparsely inhabited, although there is evidence of a long history as a stepping stone from Norway in ancient times. The general nature of the Shetland Islands, the windblown climate and somewhat sparse vegetation, have contributed to the miniaturization of livestock there in general. Because of the isolation of the Islands and the difficulty of making a living, animals there had to be very hardy.

The early native dogs were a very mixed lot but were generally very small, often 8-10 inches in height. It has been said that the ancestors of the dogs were Spitz type dogs brought from Scandinavia by early settlers, along with the large white Pomeranian, King Charles Spaniel, and smaller working sheepdogs from Scotland. The native dogs were rather inbred as no one kept more dogs than were needed for work.

The dogs were used to work Shetland Sheep, a small, extremely agile, almost goat-like breed. These original Island dogs were bred solely for utility. Because there are no fences on Shetland, the dogs did not do traditional sheep herding. They were used to drive sheep into rough stone enclosures so they could be dipped or "rooed," as pulling the wool off them was called. They were also used to drive the rather wild sheep away from the crofter's meager gardens. Another task was staying with the sheep on the more remote uninhabited islands in the summer. There they needed to be able to protect lambs from birds of prey like eagles, and traverse the seaweed covered rocks. The dog used its vocal abilities to bark at birds and scare them away. Barking was also a way to move sheep away from the croft and to locate the dog.

In the early 1900's, boats visiting from England brought additional influences and English tourists willing to take on small dogs as pets. An enterprising Shetlander, one James Loggie, decided that the native "breed" might be cultivated to be sold to summer visitors. The black faced sheep are called collies or colleys and so dogs that worked them were called collie dogs. It was proposed that the native dogs be termed Shetland Collies and a club was formed in 1908 to promote them. A Mr. C.F. Thompson pioneered the breed in Scotland were a breed club was formed in 1909. When the English Club was established in 1914, Collie breeders looked at the rather nondescript little dogs and fought any reference to Collies, so the breed's name was changed to the Shetland Sheepdog.

The most dramatic advancement for the breed occurred when English breeders decided to try to make the Sheltie a miniature collie by crossing full sized Collies with the small native dogs. Many of these crosses were declared ones, with a remarkable improvement in type. However, when dogs were sent to America in the 20's and 30's, the AKC refused to register many early top English imports because of the Collie crosses. Catherine Coleman (Sheltieland Kennels), then secretary of the American Shetland Sheepdog Club, went to England and convinced the Kennel Club to remove notation of the Collie crosses so the breed could be established in America. Because a great many early dogs went to America had the Collie crosses close up, stabilization of the breed type and size was an enormous problem. Mary Van Wagenen (Sea Isle Kennels), breed historian, calculated that American Shelties have approximately 50% Collie blood.

Because of a virtual cessation of imports during and after World War II, the Sheltie in England and America are rather different today. The English have proceeded with an ideal size of 14 1/2 inches for dogs and 14 inches for bitches, while the American standard calls for dogs and bitches to be between 13-16 inches. When the American standard was revised in 1952, old time breeders fought for an ideal size and a disqualification for predominantly white. The AKC essentially told the club to pick either size or color for the disqualification, with the result that the club members voted for size disqualification (under 13 inches or over 16 inches) as "gentlemen's agreements" that dogs over 16" would not be shown had been widely ignored. It was hoped that breeders would aim for the middle ground. Because of AKC's limiting the club to one new disqualification (brindle color being a disqualification already), the present wording regarding white was adopted.

That decision made in 1952 has caused the Sheltie in America to be generally larger that those in England, and the amount of white seen on American dogs exceeds anything seen in England, even though the current standard language regarding predominantly white describes a fault tantamount to disqualification.

This brief history was written for ASSA Judges Education by Charlotte McGowan, author of The Shetland Sheepdog in America. If you would like to learn more about Sheltie history, see the list of additional reading at the bottom of this page.

Photo: Zesta, photographed in 1913, "bred and sold by Mr. Loggie of the Islands,...was considered by all to be the best specimen seen up to that time..." (Catherine Coleman Moore, The Shetland Sheepdog, 1943). At that time the ideal size was 12 inches. 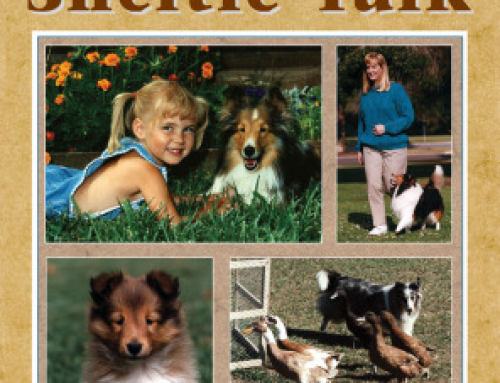 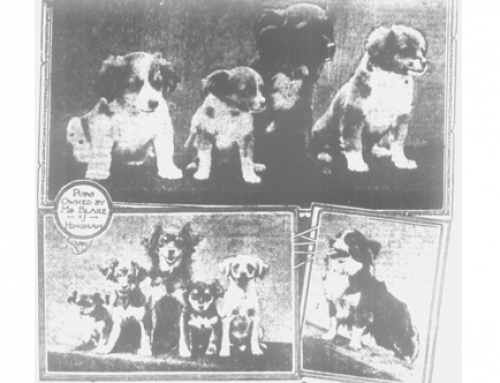 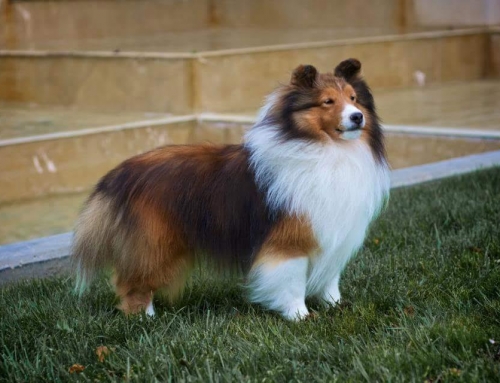 Interpretations of the Standard Gallery

Interpretations of the Standard 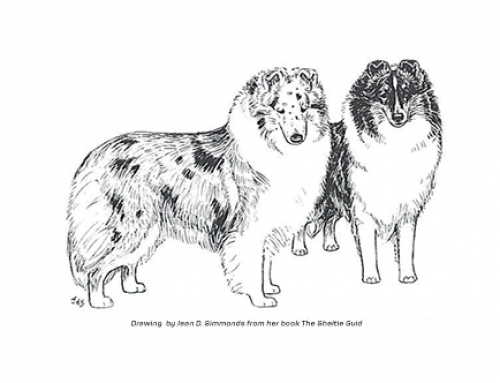