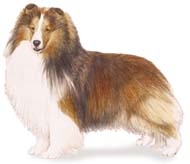 Preamble -- The Shetland Sheepdog, like the Collie, traces to the Border Collie of Scotland, which, transported to the Shetland Islands and crossed with small, intelligent, longhaired breeds, was reduced to miniature proportions. Subsequently crosses were made from time to time with Collies. This breed now bears the same relationship in size and general appearance to the Rough Collie as the Shetland Pony does to some of the larger breeds of horses. Although the resemblance between the Shetland Sheepdog and the Rough Collie is marked, there are differences which may be noted. The Shetland Sheepdog is a small, alert, rough-coated, longhaired working dog. He must be sound, agile and sturdy. The outline should be so symmetrical that no part appears out of proportion to the whole. Dogs should appear masculine; bitches feminine.

Size, Proportion, Substance
The Shetland Sheepdog should stand between 13 and 16 inches at the shoulder. Note: Height is determined by a line perpendicular to the ground from the top of the shoulder blades, the dog standing naturally, with forelegs parallel to line of measurement.

Disqualifications-- Heights below or above the desired size range are to be disqualified from the show ring.

In overall appearance, the body should appear moderately long as measured from shoulder joint to ischium (rearmost extremity of the pelvic bone), but much of this length is actually due to the proper angulation and breadth of the shoulder and hindquarter, as the back itself should be comparatively short.

Head
The head should be refined and its shape, when viewed from top or side, should be a long, blunt wedge tapering slightly from ears to nose.

Expression-- Contours and chiseling of the head, the shape, set and use of ears, the placement, shape and color of the eyes combine to produce expression. Normally the expression should be alert, gentle, intelligent and questioning. Toward strangers the eyes should show watchfulness and reserve, but no fear.

Eyes medium size with dark, almond-shaped rims, set somewhat obliquely in skull. Color must be dark, with blue or merle eyes permissible in blue merles only. Faults-- Light, round, large or too small. Prominent haws. Ears small and flexible, placed high, carried three-fourths erect, with tips breaking forward. When in repose the ears fold lengthwise and are thrown back into the frill. Faults-- Set too low. Hound, prick, bat, twisted ears. Leather too thick or too thin.

Skull and Muzzle Top of skull should be flat, showing no prominence at nuchal crest (the top of the occiput). Cheeks should be flat and should merge smoothly into a well-rounded muzzle. Skull and muzzle should be of equal length, balance point being inner corner of eye. In profile the top line of skull should parallel the top line of muzzle, but on a higher plane due to the presence of a slight but definite stop. Jaws clean and powerful. The deep, well-developed underjaw, rounded at chin, should extend to base of nostril. Nose must be black. Lips tight. Upper and lower lips must meet and fit smoothly together all the way around. Teeth level and evenly spaced. Scissors bite.

Neck, Topline, Body
Neck should be muscular, arched, and of sufficient length to carry the head proudly. Faults-- Too short and thick.

Back should be level and strongly muscled. Chest should be deep, the brisket reaching to point of elbow. The ribs should be well sprung, but flattened at their lower half to allow free play of the foreleg and shoulder. Abdomen moderately tucked up. Faults-- Back too long, too short, swayed or roached. Barrel ribs. Slab-side. Chest narrow and/or too shallow. There should be a slight arch at the loins, and the croup should slope gradually to the rear. The hipbone (pelvis) should be set at a 30-degree angle to the spine. Faults-- Croup higher than withers. Croup too straight or too steep.

The tail should be sufficiently long so that when it is laid along the back edge of the hind legs the last vertebra will reach the hock joint. Carriage of tail at rest is straight down or in a slight upward curve. When the dog is alert the tail is normally lifted, but it should not be curved forward over the back.
Faults-- Too short. Twisted at end.

Forequarters
From the withers, the shoulder blades should slope at a 45-degree angle forward and downward to the shoulder joints. At the withers they are separated only by the vertebra, but they must slope outward sufficiently to accommodate the desired spring of rib. The upper arm should join the shoulder blade at as nearly as possible a right angle. Elbow joint should be equidistant from the ground and from the withers. Forelegs straight viewed from all angles, muscular and clean, and of strong bone. Pasterns very strong, sinewy and flexible. Dewclaws may be removed. Faults-- Insufficient angulation between shoulder and upper arm. Upper arm too short. Lack of outward slope of shoulders. Loose shoulders. Turning in or out of elbows. Crooked legs. Light bone.

Feet should be oval and compact with the toes well arched and fitting tightly together. Pads deep and tough, nails hard and strong. Faults-- Feet turning in or out. Splay feet. Hare feet. Cat feet.

Hindquarters
The thigh should be broad and muscular. The thighbone should be set into the pelvis at a right angle corresponding to the angle of the shoulder blade and upper arm. Stifle bones join the thighbone and should be distinctly angled at the stifle joint. The overall length of the stifle should at least equal the length of the thighbone, and preferably should slightly exceed it. Hock joint should be clean-cut, angular, sinewy, with good bone and strong ligamentation. The hock (metatarsus) should be short and straight viewed from all angles. Dewclaws should be removed. Faults-- Narrow thighs. Cow-hocks. Hocks turning out. Poorly defined hock joint.

Feet as in forequarters.

Coat
The coat should be double, the outer coat consisting of long, straight, harsh hair; the undercoat short, furry, and so dense as to give the entire coat its "standoff" quality. The hair on face, tips of ears and feet should be smooth. Mane and frill should be abundant, and particularly impressive in males. The forelegs well feathered, the hind legs heavily so, but smooth below the hock joint. Hair on tail profuse. Note: Excess-hair on ears, feet, and on hocks may be trimmed for the show ring. Faults-- Coat short or flat, in whole or in part; wavy, curly, soft or silky. Lack of undercoat. Smooth-coated specimens.

Color
Black, blue merle, and sable (ranging from golden through mahogany); marked with varying amounts of white and/or tan. Faults-- Rustiness in a black or a blue coat. Washed-out or degenerate colors, such as pale sable and faded blue. Self-color in the case of blue merle, that is, without any merling or mottling and generally appearing as a faded or dilute tri-color. Conspicuous white body spots. Specimens with more than 50 percent white shall be so severely penalized as to effectively eliminate them from competition. Disqualification-- Brindle.

Gait
The trotting gait of the Shetland Sheepdog should denote effortless speed and smoothness. There should be no jerkiness, nor stiff, stilted, up-and-down movement. The drive should be from the rear, true and straight, dependent upon correct angulation, musculation, and ligamentation of the entire hindquarter, thus allowing the dog to reach well under his body with his hind foot and propel himself forward. Reach of stride of the foreleg is dependent upon correct angulation, musculation and ligamentation of the forequarters, together with correct width of chest and construction of rib cage. The foot should be lifted only enough to clear the ground as the leg swings forward. Viewed from the front, both forelegs and hindlegs should move forward almost perpendicular to ground at the walk, slanting a little inward at a slow trot, until at a swift trot the feet are brought so far inward toward center line of body that the tracks left show two parallel lines of footprints actually touching a center line at their inner edges. There should be no crossing of the feet nor throwing of the weight from side to side.

Faults-- Stiff, short steps, with a choppy, jerky movement. Mincing steps, with a hopping up and down, or a balancing of weight from side to side (often erroneously admired as a "dancing gait" but permissible in young puppies). Lifting of front feet in hackney-like action, resulting in loss of speed and energy. Pacing gait.

Temperament
The Shetland Sheepdog is intensely loyal, affectionate, and responsive to his owner. However, he may be reserved toward strangers but not to the point of showing fear or cringing in the ring. Faults-- Shyness, timidity, or nervousness. Stubbornness, snappiness, or ill temper.

Disqualifications
Heights below or above the desired size range, i.e., 13-16 inches.
Brindle color.

History of the Shetland Sheepdog

The Shetland Islands are remote and sparsely inhabited, although there is evidence of a long history as a stepping stone from Norway in ancient times. Read more!

Many people say they find the Sheltie confusing and hard to judge, and indeed there is a wide range of size and style AND color and markings. Read more...

Interpretations of the Standard

Written breed standards are certainly subject to differences in interpretation as identical words create different pictures in the minds of different readers. Read the full article!

Easy to study this PDF illustration!

The Standard at a Glance