Dermatomyositis (DMS)* is an autoimmune disease of the skin and muscle that occurs in both humans and dogs. In dogs, DMS is most often diagnosed in Shetland Sheepdogs and Collies and is caused by a combination of environmental and genetic factors. Skin lesions consist of hair loss and crusts on areas with minimal muscle overlying the bone such as the face, ear tips, legs and feet, and the tip of the tail. Muscle involvement is uncommon in Shelties. Onset of lesions may occur as early as 12 weeks of age or in mature dogs. In some affected puppies, lesions may diminish with age and may or may not return at an older age. Stress may induce worsening of lesions. Definitive diagnosis can only be made with a skin biopsy. Treatment with pentoxyphyline (Trental®), corticosteroids, and vitamin E has been helpful in some dogs**.

The ASSA and others have supported research concerning DMS since the early 2000’s with the aim of discovering the underlying genetic cause and development of a DNA test to aid breeders in reducing the incidence of DMS. In 2017, Dr. Leigh Anne Clark of Clemson University and her research team found 3 genes that, in combination, contribute to the development of DMS in Shelties and Collies [1].

The DNA test for Dermatomyositis

The Clemson research group conducted a genome-wide association study in Collies and Shelties and identified three regions of the genome (loci) that are associated with DMS. Each region harbors a genetic change (allele) that is associated with DMS. Certain combinations of alleles at these three loci are associated with an increased risk for development of DMS, while other combinations are rarely observed in affected dogs. Their work resulted in a 3-gene DNA test that will help determine the likelihood of an individual dog developing DMS and give breeders a tool to gradually diminish the incidence of DMS (over a period of years) while maintaining genetic diversity and desirable phenotypic traits within the breeds.

This test does not replace the need for a skin biopsy to make a definitive diagnosis of DMS***. Since the appearance of DMS in a dog is due to a combination of genetic and environmental factors, some dogs with a high genetic risk may not be exposed to environmental triggers and never develop the disease.

Initially, the Clark Laboratory was the only one offering the 3-gene DNA test for DMS. In May, 2017, another DNA testing laboratory began offering the test. Since the test was not patented, other laboratories may also do so. To find a list of laboratories that are approved by OFA to run the DMS test see: http://www.ofa.org/dna_alltest.html. When at that link, click on “Disease” and choose Dermatomyositis, then click on “Breed” and select Shetland Sheepdog. DMS test results from the laboratories on that list will be accepted by OFA into their database.

Below is an example of a test certificate with owner/dog information removed: 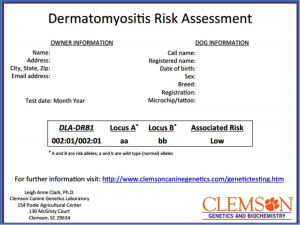 The 3 genes evaluated are DLA-DRB1, Locus A, and Locus B. (See either the summary document or the scientific article for details about these genes.)

The risk allele at the Dog Leukocyte Antigen (DLA) complex (DLA-DRB1*002:01) may be referred to as “C”, and the lower case letter “c” represents any alternate allele for DLA-DRB1 with the more frequent alternate allele being DLA-DRB1*023:01. (See Table1 (below) from the research article.) The normal (aka “wild type”) alleles of loci A and B are represented by lower case letters, a and b, while the risk alleles are A and B.

Genotypes of DLA-DRB1, Locus A, and Locus B are considered together. For each possible genotype, the percentage of affected dogs in that group was determined. Based on the genotype, the likelihood of an individual dog developing DMS is classified as low (0% - 5%), moderate (33% – 50%), or high (90% – 100%). (See Table 3 (below) from the research article.)

LOW RISK GENOTYPES - In the study, these genotypes were rarely found in affected dogs [1].

MODERATE RISK GENOTYPES - In the study, up to half of dogs with these genotypes developed DMS.

HIGH RISK GENOTYPES - In the study, over 90% of dogs with these genotypes developed DMS.

Notice that homozygosity for DLA-DRB1*002:01 increases the risk of DMS from low to moderate (aaBB) and from moderate to high (AABb and AaBB).

Using the test in a breeding program:

It is recommended that breeding pairs be selected on their genotypes at locus A and B. Ideally, matings that could produce puppies with high risk genotypes (AABB, AABb, and AaBB) should be avoided. For example, if a bitch’s genotype is AAbb, it is recommended that she be bred to a dog with one of the following genotypes: aaBB, aaBb, or aabb. This mating will not produce puppies that are homozygous for A or B. Any aa-- genotype can be crossed with any --bb genotype without producing moderate or high risk genotypes, and aabb genotypes can likewise be crossed with any genotype. In general, a dog with a genotype of aabb can be bred to any other genotype to produce low risk puppies.

We have provided 2 ways for breeders to use the test results to determine possible genotypes that might result from a particular breeding.

The Table below lists the genotypes for several different Shelties.

*Notice that dogs 2 and 3 have the same high risk genotype. One developed severe DMS at 4 months of age while the other was normal at 13 years of age. As noted above, not all dogs (but the vast majority) with a high risk genotype will develop clinical disease.

Will the test results be reportable to OFA and can they be applied toward CHIC status?

Yes, the DMS test results are eligible for inclusion in the OFA database and are included in the list of “Elective” tests that can be used for CHIC status.

How will test results appear in the OFA database for a particular dog?

Only the genotype will be displayed for each dog tested, ex. 002:01/002:01aabb.  Risk interpretation will not appear.

Why will the risk interpretation not appear in the OFA database?

For breeding purposes, knowing the genotype and sharing that information are very important. The goal is to use the genetic information wisely, not to reflexively shun a dog with a high risk genotype or to continue to breed dogs with unknown genotypes.

It is important that quality dogs with at risk genotypes not be eliminated from the gene pool, but carefully used to keep the desirable traits that they possess while breeders gradually work toward reducing the number of dogs with at risk genotypes. If all dogs with moderate or high risk genotypes are removed from the gene pool, then the breed might end up with a genetic bottleneck with a different health issue. This test offers breeders a way to use dogs with high risk genotypes while producing puppies with low risk genotypes. Remember, the risk interpretation applies to the risk of an individual dog being tested to develop clinical signs of DMS, and does not indicate the risk of that dog producing affected puppies. It is important for breeders to know and share each dog’s genotype, so progress can be made in decreasing the incidence of DMS.

How can I use a dog with high risk genotype and not produce pups with DMS?

Remember Dog 3 in the table above? This is one of the few dogs with a high risk genotype (AaBB and homozygous DLA) that showed no signs of developing DMS as far as anyone knew. This dog could be used in a breeding program especially if bred to one with aabb genotype. This would result in 8 AaBb and 8 aaBb – all low risk with homozygous or heterozygous DLA. (See Punnett square below provided by the Clark Canine Genetics Research Laboratory, Clemson University, http://www.clemsoncaninegenetics.com/ .) 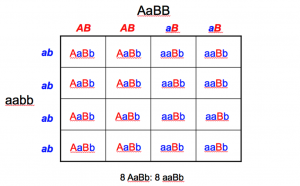 Well, that depends on her genotype. Take the case of Dog 4 in the table above. If this dog is bred to another with the same low risk genotype (DLA-DRB1 002:01/002:01AaBb) the following possibilities could result: 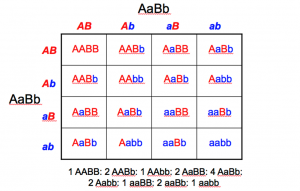 What is the most desirable genotype?

Heterozygous DLA-DRB1 along with aabb (ex. DLA-DRB1 002:01/023:01aabb) would be ideal as the DLA-DRB1 is heterozygous and there are no A or B risk alleles. However, this is a RARE genotype among Shelties as only 6% had this genotype.

Let me get this straight. If I decide to do the breeding in which each pup has a 10% chance of inheriting a high risk genotype, does that mean that only 1 in 10 pups will have that genotype?

No. Remember, each pup also has a 50% chance of being male or female, but as we all know, we can have litters in which all or most pups are one sex.   The same applies here. Each pup may have only a 10% chance of inheriting a high risk genotype, but the breeder could “lose the genetic lottery” and have all pups with the high risk genotype. It is not likely to happen, but could.

If other DNA testing laboratories begin to offer this test for DMS, will their test results be eligible for submission to the OFA database?

Yes. This test was not patented. However, Dr. Clark’s research group is continuing its research into DMS as additional genetic modifiers may exist. If so, then Dr. Clark will check for those in dogs already tested at her laboratory at no charge, which would be an advantage for using her laboratory should others begin to offer the test. Of course, the test available now is a huge asset for breeders allowing them to produce more pups with low risk genotypes.

Table 1 (Above). Frequency of DLA-DRB1/-DQA1/-DQB1 haplotypes in collies and Shetland sheepdogs. [1] 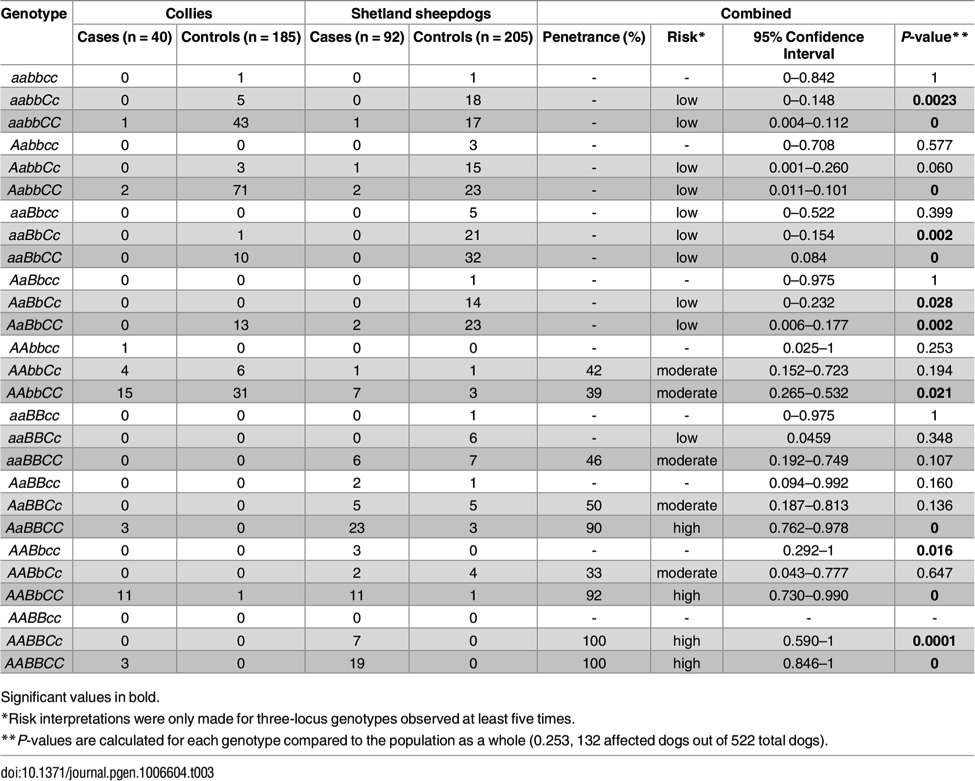 **Treatment information can be found at previous research studies supported by the ASSA.

***One laboratory that is very experienced in evaluating skin biopsies of dog suspected of dermatomyositis is the Texas A & M Veterinary Medical Diagnostic Laboratory, https://tvmdl.tamu.edu/tests/dermatopathology-exam /, http://vetmed.tamu.edu/files/vetmed/vtpb/pro/Derm_Submission_Form.pdf .

Dermatomyositis studies website written by Sherry Lindsey, RN BSN. This website was last updated in 2012, but has multiple photographs of affected dogs and detailed information about previous studies and treatment of DMS.