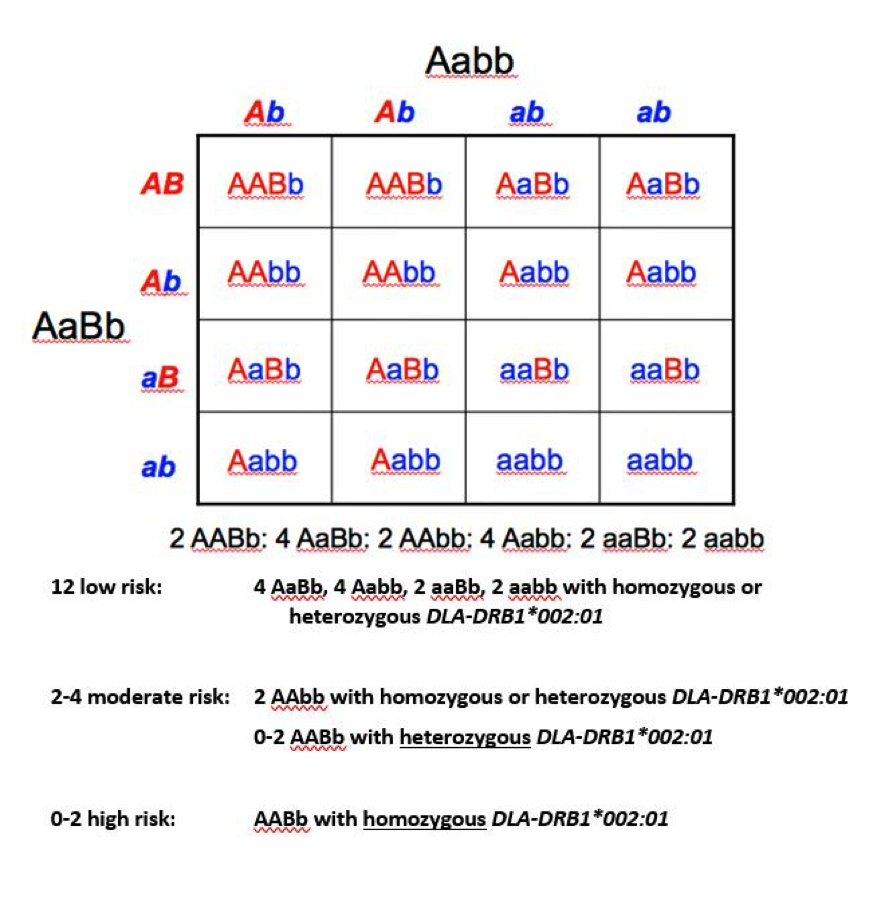 Remember, the risk interpretation applies to the risk of an individual dog being tested to develop clinical signs of DMS, and does not indicate the risk of that dog producing affected puppies.

Answer to Exercise #4: C and D are TRUE.

One Sheltie breeder who carefully studied the above table had the following question: Since the risk for AAbbCc is moderate and aaBBCc is low, do 2 copies of the "A" allele result in dogs with a greater incidence of DMS than dogs with 2 copies of the “B” allele?

Dr. Clark’s answer to the question: “We do think that A is worse than B, enough so that there is a discrepancy between the risks associated with AAbbCc (moderate) and aaBBCc (low). Unfortunately, we did not find many dogs with these genotypes.”

Comment: Many of you have already figured out that it is best not to double up on A’s or B’s, so if your dog or bitch has, for example, an “A” in its genotype, it would be best to breed it to a mate with “aa”, so not to double up on the “A”. The above stud dog was only low risk because the DLA-DRB1 was heterozygous.

* The DLA-DRB1 015:01* allele was found primarily in Shelties from Europe, not the USA.

In dogs that developed DMS, the researchers found that the more A and B risk alleles, the younger the age of onset of the disease. “Dogs having four risk alleles developed DMS at a significantly younger median age (5 months) than did dogs with only two risk alleles (18.5 months). The complete penetrance of AABB genotypes, combined with an early age of onset, suggests that these dogs may be hypersensitive to commonplace environmental stimuli (e.g., routine puppy vaccinations).” [1] The most common genotypes of affected dogs were AaBB followed by AAbb, AABb, and AABB, all with homozygous DLA-DRB1 of 002:01/002:01. All affected dogs had at least two risk alleles, and all but one were homozygous for at least one risk allele. The data suggest that dogs with more risk alleles may be more likely to develop the disease at an earlier age. Also, recall that onset of DMS follows an environmental trigger, which is a stressor that dog experiences. Dogs with high or moderate risk genotypes that experience this trigger later in life will have a later age of onset, and vice-versa.

The genotype, DLA-DRB1* 002:01/002:01 AaBB is high risk for the dog developing DMS lesions. In the research publication, 90% of Shelties with this genotype had confirmed DMS. Only 3 of 26 were considered to be normal. [1]

This dog could be used in a breeding program by breeding him to bitches with aabb genotype. All puppies resulting from such matings would have low risk genotypes of aaBb or AaBb. This test allows us to maintain genetic diversity and keep desirable phenotypic qualities of dogs while decreasing the incidence of dogs with clinical signs of DMS.

All are true! Sometimes the trigger is not obvious. Evans et al. [1] suggest that the more risk alleles that a dog carries for DMS, the less stressful the trigger needs to be, such that something not out of the ordinary like a trip to the vet for vaccinations or a scuffle with another dog may be sufficient for disease development.