Answers to the exercises can be found HERE, but links are provided where one can try to find the answers before viewing the answer document. Summary bullet points are at the bottom.

You have a bitch with the following genotype, DLA-DRB1 002:01/002:01 aabb. You don’t have to worry about knowing the genotype of any stud you might consider for her because all of her pups will have low risk genotypes no matter the genotype of the stud. TRUE or FALSE?

Go to the following webpage, https://americanshetlandsheepdogassociation.org/dermatomyositis/ , to find the answer either by using the “Genotype Calculator” or by clicking on the Punnett square link.

You have a beautiful bitch with the following genotype, 002:01/023:01 AaBb. Which of the following statement(s) is/are true? You can find answers by going to: https://americanshetlandsheepdogassociation.org/dermatomyositis/ .

Go to https://americanshetlandsheepdogassociation.org/dermatomyositis/ , to find the answer either by using the “Genotype Calculator” or by clicking on the Punnett square link.

You have a bitch that has had several previous litters with no DMS affected pups. Unfortunately, in her most recent litter of 4, 2 of the pups were affected with DMS. Which of the following are TRUE?

This exercise may not be as much “fun” as the others, but it is intended to encourage you to try to understand how risk assessments were developed. Below is a portion of Table 3 from the scientific article by the Evans et.al. [1] You can access a larger version at: https://americanshetlandsheepdogassociation.org/dermatomyositis/ . DO NOT BE INTIMIDATED!

In the table, C = DLA-DRB1*002:01, lower-case letter “c” represents any alternate allele of DLA-DRB1 such as DRB1*023:01 or DRB1*015:01. Cases = dogs with confirmed dermatomyositis. Controls = normal dogs. Penetrance = % of dogs with a particular genotype that were affected.

Using the Table below:

I’ll admit that my eyes glazed over the 1st time I looked at this table and had to “whip” my brain into submission. J

The results for Collies and Shelties were pooled together to develop risk assessments. 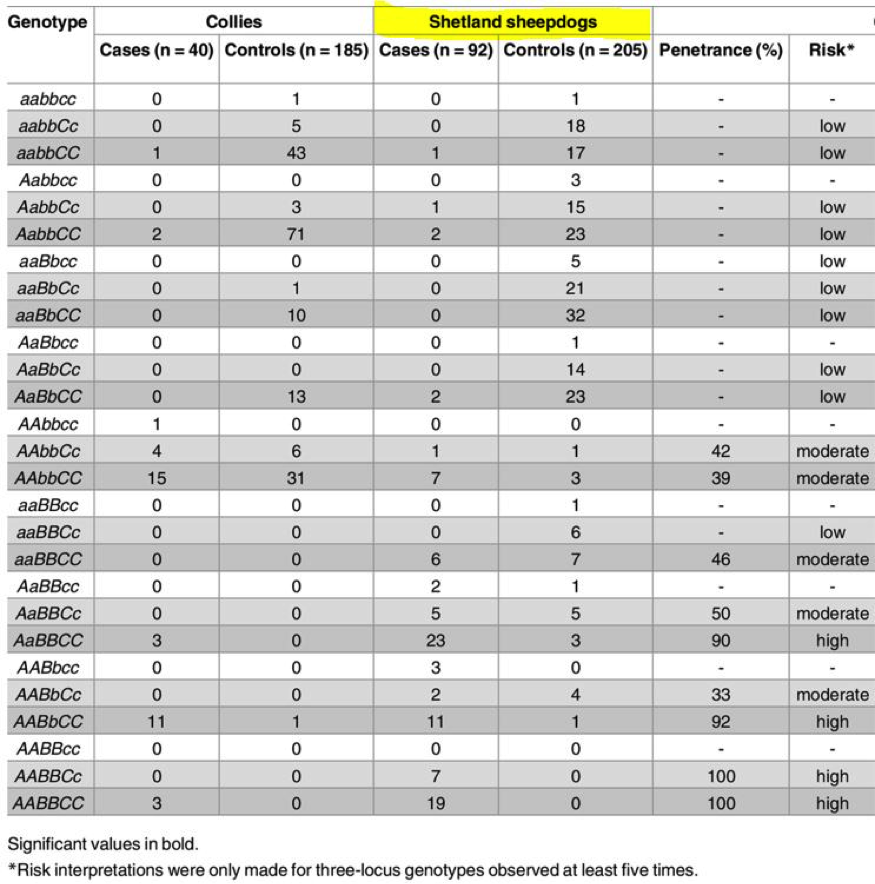 You have a gorgeous stud dog with the following genotype: DLA-DRB1 002:01/015:01 aaBB. He was bred several times before you knew his genotype. So far, no puppies have shown any signs of DMS, and several have championship points! Now, how do you handle future requests for stud service?

* The DLA-DRB1 015:01* allele was found primarily in Shelties from Europe, not the USA.

DMS Exercise # 7: This is a series of questions.

Why do some DMS-affected dogs develop lesions as young dogs while others may not develop lesions until later? (Hint: The likely answer can be found in the Summary document at https://americanshetlandsheepdogassociation.org/wp-content/uploads/2016/07/DMS-article-summary.pdf ).

You have a beautiful, young dog with the following genotype: DLA-DRB1*002:01/002:01 AaBB. This dog is exactly what you have been trying to get for years. He has won multiple specialties and finished quickly. Quite simply, he is exceptional. He had a bit of hair loss below one eye that you thought was the result of a scuffle with a kennel mate, but the hair has grown back. What is his risk for developing DMS?   How can this dog be used in a breeding program?

How many Shetland Sheepdog DMS test results have been entered into the OFA database?

This exercise is for those who have never used the search functions of the OFA website.   Go to the OFA homepage: http://www.ofa.org/. In the upper left corner is a blue box as shown in Figure 1. Click on the “Advanced Search” button. On the next page that appears, select “Shetland Sheepdog” from the breed list (Figure 2) then scroll down to the “Report Type” section (Figure 3) and scroll down until you find “Dermatomyositis” and highlight that. Lastly, hit the “Begin Search” button at the bottom of the page. 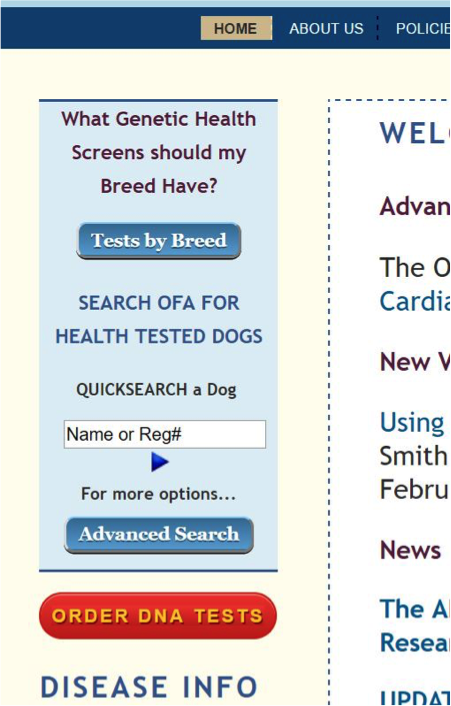 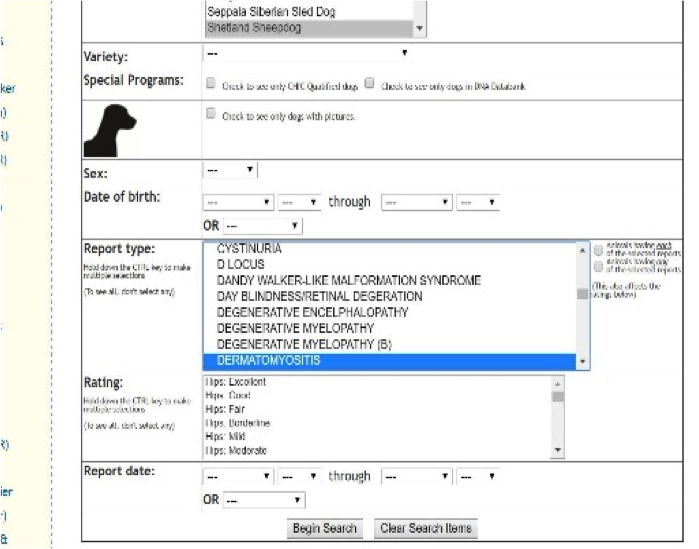 There are several ways to use the search functions of the OFA database. If you know the registered name or number of a particular dog you are interested in, just enter that information in the blue box on the home page and click the blue arrowhead. If you want to find Shelties that have had certain tests done, you can go to the “Advanced Search” page and enter the breed, sex (if you only want to see males or females) and select the desired tests. If you want to view tests done on dogs with a certain kennel name, you can enter the kennel name in the “Part of Name” section toward the top of the page.

As DMS testing becomes more commonplace and results are reported to OFA, a person looking for a stud with a particular genotype could find a list of such dogs there. For instance, if you have a bitch with AaBb genotype and want to breed her to a male with aabb, so all pups would have low risk genotypes, you could find males with that genotype by using the search function. Once you get the list of males with DMS test results, you would then click on the name of each dog to go to the OFA page for that dog and view the genotype posted there.

You have a dog with the following genotype, DLA-DRB1* 002:01/002:01 AaBB. Neither the sire nor dam of this dog have been DNA tested for DMS.  What, if anything, can you surmise about the genotype of the parents?

You test your new puppy that you hope to use as a stud. His genotype is 002:01/023:01 AAbb, a moderate risk genotype. (42% of the dogs in the study with this genotype developed DMS.) Which of the following is/are true?

Which of the following have been reported as preceding the initial outbreak of DMS and so are likely “triggers” for disease development?